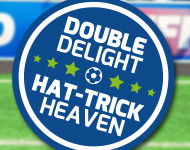 In betting it often pays to scour the bookies for special offers. If you think of it a bit like a supermarket shop you tend to focus on the bargains and deals to get the best value for money.

Betfred is a really interesting bookmaker as they try to do things differently. This offer is one you're going to absolutely love if you are a fan of betting on First Goalscorer.

Double Delight basically means Betfair will pay double odds on selected games if your first goalscorer choice scores the first goal, and then scores a second goal in the 90 minutes. They'll even play treble if a hat trick is grabbed.

There is one match every day to choose from, so it pays to pick and choose which games you go for, as a general rule of thumb pick a game with a prolific scorer featured. You can simply use a stats site such as whoscored.com to find out who are the top scorers and who tends to score more than one goal in a game.

Now tonights game features Tottenham. This would normally be a straightforward tip of picking Harry Kane, unfortunately he is out with a broken nose. This in my opinion makes this game poor for any Tottenham players to score to goals, and also Fiorentina are unlikely to grab the first goal as underdogs.

So let's take the next available match

Although Hull haven't exactly been banging in the goals the 6-0 victory over Charlton in January gives some hope that Hernandez is capable of belting in a couple of goals. Certainly taking 4/1 on him being first goalscorer is worth the odds and should he get another goal this doubles to 8/1. Say you have £50 on the first goal that's £200, if he nets another Betfred are giving you £200 on the house.

The best thing you can do is analyse the list Betfred put up, if you think there is a player who has a reasonable chance of nabbing the first goal and a slight chance of getting two, then grab this deal and chances are eventually one of your selections will hit the double (or in extreme cases a hat trick!) and you'll be quids in!

This is a fantastic deal for first goalscorer fans, and you can claim up to £6000 on this offer.