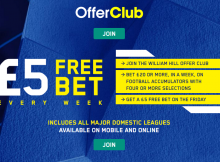 William Hill offers one of the most lucrative football promotions. It’s a weekly £5 free bet you get when you bet £20 on a accumulator. It’s just fabulous what William Hill is doing to pamper their existing customers and new visitors!

Free bets have always been beneficial for bettors. Many people simply are not aware of many of the promotions and free bets and do not realize how important they are for higher profits. William Hill has always been known for being one of the bookies with more promotions for its users, especially for those who already have time making bets with them.

New and existing customers of William Hill may opt for the £5 free bet weekly. To get the free bet you just have to make a £20 bet on a football accumulator which includes 4 types of bets or more. You have to join the exclusive and unique William Hill Offer Club to be eligible for this promotion of a £5 free bet.

The rules and terms are very clear to use this promotion. Only football accumulators including 4 types of bets approved under the terms and conditions of this promotion. Largely the most common such as: 90 minutes, Over/Under 2.5 goals, First goalscorer and some other options. Picks will be only in the major leagues in the world, for example: La Liga, English Premier League (1,2 and cups as well), Bundesliga, Serie A, Ligue 1 and other important football leagues.

It’s simply a great deal! You just have to know how to use it to take advantage of the football accumulators in the most famous leagues. William Hill always gives advantage to its bettors to get better and bigger profits. 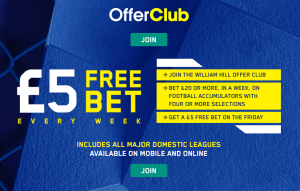 It’s a good idea to use accumulators?

Accumulators are a way to make money much faster without having to bet on several games at the same time. They are widely used by most bettors. They have a great appeal when several football favorites teams are combined to win their matches, specially in top leagues. Some professional bettors use them to increase their bankroll quickly with a big bet.

Accumulators are generally a good investment but in the short term. You should not use too many accumulators, with 2 or 3 accumulators per week would be more than enough to get some extra profits quickly. Best accumulators are football, especially those that are combined with over/unders and favourites with a lot of market support.

There are disadvantages when using accumulators?

Yes. You must use accumulators carefully, because if the right games/picks are not chosen, this could cause big losses. Betting on accumulators should not be more than 2% of bankroll or a quarter value of an unit

Accumulators have always been a good choice and even more so if you can get promotions and giveaways as the £5 weekly free bet offered by William Hill. Accumulators stake amount should not exceed £5 in William Hill to take advantage of the free bet.